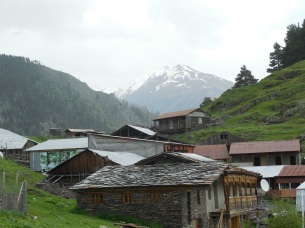 The road to Omalo, the central village of the mountainous Tusheti region of Georgia, from the lowlands is 70-some kilometers and unpaved, and I sit in the front of a 4×4 vehicle “taxi” as it jostles along for the three-hour journey. The road has seemingly just opened for the season with the clearing of snow on the mountain pass, and three highland villagers are riding with me back up from wintering in the valley. We ascend through the trees into the domain of the snowy peaks, crossing over rushing torrents here and there. The middle of the journey finds us at a roadside picnic table, lunching on food the villagers have brought while overlooking a sheer drop; nearby is a roadside memorial to some locals whose vehicle had accidentally slipped over some years ago. Up at the snowy pass, a cow lies on the roadside as if resting, the empty eye sockets gaping from its still, cocked head.

I come alone to Tusheti, and Tusheti is one of the most soul-quaking places to be alone.

In Omalo, after getting my bag and paying the driver, I look around in the silence. A host of sleepy structures straddling a pair of hills stares back at me. One, a metal-roofed chalet-looking house with fresh wood and a big sign that says “HOTEL” sits perched up the hill. I make my way up.

There is something omnipresent about little Omalo: the constant sound of running water. Standing in the slurry gravel road that hugs the main hill, one can always hear the trickle from the rivulets etched into the turf here and there, the mountain flow running amid the green grass. The water moves across the roads and spreads into marshy pools in the pasture on the other side. Sometimes it’s nice just to stand and listen; I couldn’t recall the last time I was amid such a sound.

The snowy peaks surrounding the place are white and distant and silent, and they are something to gaze upon. When the clouds shroud over the land but spare the mountains, the peaks glow eerily like some unknown deity.

The owner of the “hotel” in Omalo is an older woman who is always wrapped in numerous sweaters and a long skirt. Her hair is dyed reddish, but the roots show grey. She speaks no English. At meal times in the dining room, over a hearty feast that always makes me question whether she is really the only one cooking behind the kitchen door, I look over at the old woman sitting beside the wood oven, seemingly gazing into space. She has dark rings around her eyes and wrinkles marking her face: a time-worn subject of the land. The Czech-and-Slovak couple who are the only other travelers in the guesthouse said they thought they heard the woman reference once that her husband had passed away some time ago. I never do learn her name.

All the locals I end up seeing in Tusheti are similar to the old woman in some indescribable way: a silent gruffness, I suppose. Perseverance. It is as if they were born of the mountain soil itself, like the very shrubs and shoots that break forth from the forest floor. Perhaps this observation of a traditional mountain people is none too surprising, but I know that my Midwestern upbringing hasn’t instilled in me what they have, whatever it is.

In the morning, you can feel the mountain cool through your exposed fingers, on your face, in your nostrils. Clouds creep up the wide pasture plateau below.

The “Czechoslovakian” couple and I hike together each day to the other rustic villages: Shenako, Diklo, Dartlo. We are specks moving through noble forests and great, green valleys rolled in sunshine. Here and there we pass villagers and their herds of livestock. There are old, squat dwellings, and there are also the chance, square defense towers long ruined since medieval times, the shale building material of their structure slowly crumbling to the earth; in Dartlo I gaze from within two of them at the milky sky through their missing roofs.

Everywhere we go, though, the mountains peer silently like gods. Perhaps the shag moss in the trees detects their breath. 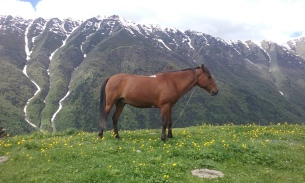 In the evening I sit in my room on the third level, with a bare wood floor, a queen-sized bed that slouches on one side and a plastic stool. My bags are open and exposed in the corner. It is cold in there, since the outside hallway leads to an open balcony that is currently masked from the exterior with large tarps. Sometimes I just sit and listen to the pat-pat-pat of the rain falling from the roof above onto the section of tin roof jutting out below my window. These are some of the scarce occasions I can sit and feel the black immensity of the night, which bears down on the dim light in my room.

I walked through the village of Upper Omalo, which sits down the hill from the old fortress that once protected it from whatever ill blood that used to exist in these mountains. The tall stone towers of the fortress had been restored to their former glory by some donation from overseas, it read somewhere. I sat down in front of one and watched a storm coming on above those luminous peaks, and I shut my eyes. The wind brushed my cheeks.

Andrew Wernette is an aspiring writer who loves to travel. After a small stint as a newspaper journalist, he quit his job in 2016 and spend much of the year backpacking through the Caucasus, Turkey and Eastern Europe. Andrew currently teaches English in Vietnam.